When it comes to the charming Maritimes, there’s no better city than Halifax, Nova Scotia. Not only is it Nova Scotia’s capital city, but it’s also the largest city in the Atlantic provinces. While it started off as one of Canada’s important ports, it now also has a thriving tourism scene thanks in part to its manicured parks and gardens, heritage buildings, a thriving arts scene, a variety of pubs and craft breweries, a lively music scene, and a nice steady flow of sea breezes.

Thanks to the major airport, it has also become the gateway to the Maritimes and has something to offer people of all ages. Whether you decide to stroll the beautiful waterfront, catch one of the many events that happen throughout the summer, watch some live music at one of the many Celtic pubs, or visit one of the many wonderful museums and parks, Halifax is a great place for an East Coast vacation. 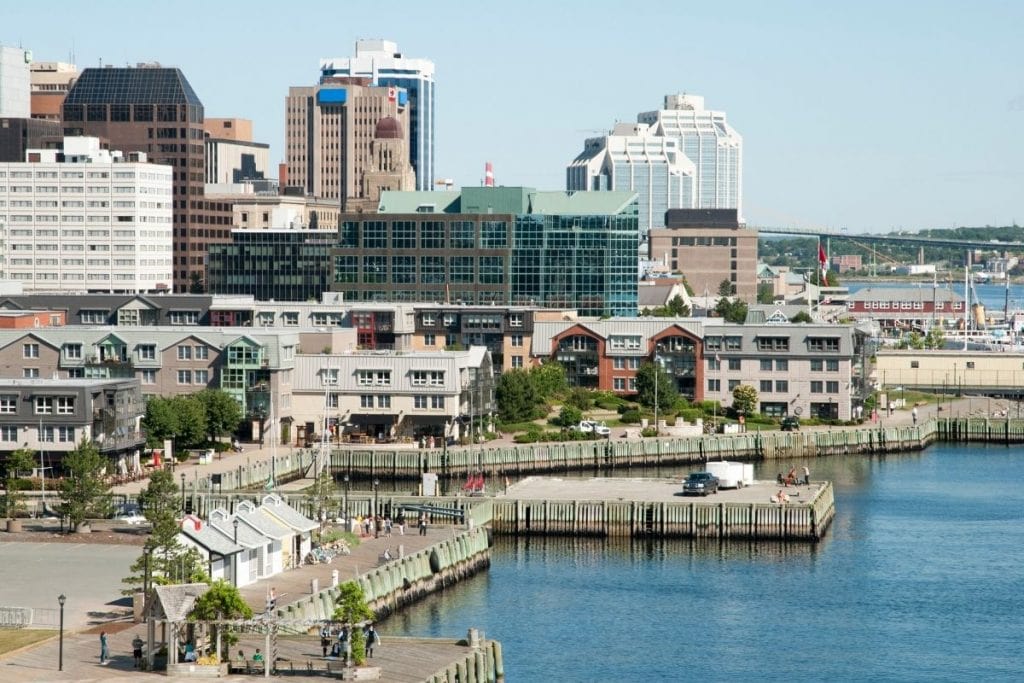 What to Do In Halifax

We’ve been to Halifax many times, usually on an epic Canada road trip. In 2013, we jumped in the car with my parents and drove from Alberta to Newfoundland, taking time along the way to explore both Halifax and the Maritimes. Then in 2017, we completed the biggest road trip of our lives, flying into St. John’s, Newfoundland, buying an SUV, and then driving across the country for 150 days, spending four nights in Halifax.

Halifax has always been one of our highlights of Canada and we love exploring the city every time we find ourselves in this charming little slice of the country. So, whether you’re visiting for a weekend or spending your entire vacation in Halifax and the surrounding area, we’ve listed some of the best Halifax attractions below.

When I think of Halifax, the waterfront immediately comes to mind. Not only is it very scenic, but it’s also in the heart of downtown Halifax, walking distance to many of the top things to do in the city. The Harbourwalk is a four-kilometer boardwalk that snakes its way along the waterfront. You can start from anywhere, but if you want to do it in one straight line, start off by the Historic Properties, which is a great place to see beautifully restored Victorian-era buildings.

Along the wharf, you’ll also find the information centre, a variety of beautiful boats, whale-watching tours, and the Maritime Museum of the Atlantic, which we’ll talk about below. There’s also some cool artwork along the way and you’ll eventually end at the Farmers’ Market and the Canadian Museum of Immigration at Pier 21, which is one of the top things to do in Halifax.

If you’re hungry or thirsty, don’t worry! You’ll find dozens of restaurants and pubs along the waterfront.

Maritime Museum of the Atlantic

For those interested in Maritime artifacts, history, the RMS Titanic, and the Halifax explosion, this is the place to go. Part of the museum used to be a chandlery, which is where all the gear needed to outfit a vessel was sold. In fact, you can still smell the charred ropes, cured to protect them from the saltwater. There’s also a cool display about the Titanic, which sank fairly close to Halifax. You’ll also find a variety of extremely detailed boat models. When we there, we even got to try our hand at Morse code. Outside, you’ll find Canada’s official Naval Memorial, the HMCS Sackville, docked outside and staffed by the Canadian Navy.

Canadian Museum of Immigration at Pier 21

Between 1928 and 1971, more than one million immigrants entered Canada at this port. Their stories and the history of it all are displayed beautifully at the museum, a heartwarming place to experience one of the things that have made Canada what it is today. You’ll find photos, artifacts, and first-person accounts of what it was like to arrive in Canada and what their first day was like. For Karla, it was an emotional place, as she connected with the stories of people moving to a new country.

Also located not too far from the Halifax waterfront is the Alexander Keith’s Brewery. Founded in 1820 by the then Halifax mayor Alexander Keith, this brewery is one of the oldest in North America. While production is now done from a larger site, Alexander Keith’s Brewery tour is truly one of a kind, which is why it’s now one of the most popular Halifax tourist attractions. Guided by actors in period costumes, guests are taken throughout the historic property while learning about the company’s history, the brewing process, and a delicious beer tasting. In true east coast fashion, the beer tasting is done in the basement, combined with live musical entertainment and stories. We had a blast here.

With so many historical sites across Canada, there must be a reason why this is the most visited. This star-shaped Citadel is strategically positioned atop Halifax’s Citadel hill, which offers beautiful views of Halifax. Construction began in 1749, although the current fort was built between 1818 to 1861. Guests can walk around at their own pace or take one of the awesome guided tours, which explain the fort’s shape and history. While the exhibits are not always open, the grounds inside are open year-round. During the busy season, you can even sign up to fire an old-fashion gun.

If you’re looking for a scenic place to go for a relaxing stroll, you may want to check out the 16-acre Halifax Public Gardens. Established in 1867 in celebration of Canada’s Confederation, these gardens are often considered to be the finest Victorian city gardens in all of North America. Entering through a wrought iron gate, you’ll then find many pathways, water fountains, 140 different species of trees, vibrant flowers, and a variety of statues. They’re also popular with locals, home to families taking a stroll, live music, tai chi practitioners, and people playing board games.

Everyone knows the story of the infamous Titanic, which sank about 400 miles off the coast of Newfoundland and Nova Scotia. The luxury liner, which was bound for New York, sunk after hitting the corner of an iceberg, killing many of the people on board. Of the bodies recovered, 121 are buried at Fairview Lawn Cemetery. It’s quite a sad place to visit, and 1/3 of the remains have never been identified. What’s made this into a little bit of an attraction is the graveyard reading J. Dawson. With the success of the movie Titanic, people think this is the Jack Dawson portrayed in the film. It is merely a coincidence. Nonetheless, if the Titanic left a mark on you, this might be a place to visit.

Ride a Bike around Halifax

If walking is just too much, you might want to consider renting a bike and peddling around the maritime city. Located next to the Halifax harbour is a bike rental shop called I Heart Bikes. They’ll get you set up so you can peddle along the harbour or ride into the city. Plus, you can save 10% with the Must Do Canada Saver Card.

Take a Photo Tour in Halifax

If you’re looking to get some amazing photos of Halifax and the surrounding areas but aren’t sure where to go and how to get those “award-winning” shots, you may want to take a photo tour with Picture Perfect Tours. Georgie will pick you up and drive you to areas of interest such as Peggy’s Cove while showing you how to get a shot, or many shots, that you’re proud of. You’ll also learn some history about the areas you visit and of course, lots of photography tips!

Go on a Secret Tour of Halifax

If you’re looking for a unique way to explore Halifax on your own, consider taking a self-guided tour with Secret Tours. You get to choose the challenge and your phone becomes your guide. With each clue you’re given, you’ll explore a secret side of the city!

Go on a Winery Tour in Wolfville

Not a lot of people know that Nova Scotia is home to a wonderful wine region called the Annapolis Valley. This region is located in the western part of the Nova Scotia peninsula, squeezed in between two parallel mountain ranges along the shore of the Bay of Fundy. Thanks to the shelter provided by these two mountain regions, there’s a “micro-climate” that produces relatively mild temperatures. Toss in fertile glacial sedimentary soils and you have a great place for producing wine! At 126 kilometres (78 miles) in length, there’s a lot of areas to explore with one of the most popular being the wineries of Wolfville.

If you happen to be in Halifax during one of the many year Halifax events, you might be in for a real surprise. One of our favourite events is the Busker Festival. It’s one of the biggest in Canada and it’s free to attend. You’ll find fire breathers, acrobatics, comedians, magicians, and all sorts of talented souls. Plus, it’s all along the waterfront! The festival runs for six days over Nova Scotia’s Natal Day long weekend. There are over 300 shows over those six days and no shortage of food, clothing, jewelry, and more.

If you’re looking for some of the best hotels in Halifax, you’re in luck. There are many to choose from, ranging from chain hotels to historic guesthouses.

For more cool things to do in Atlantic Canada, check out these articles below: