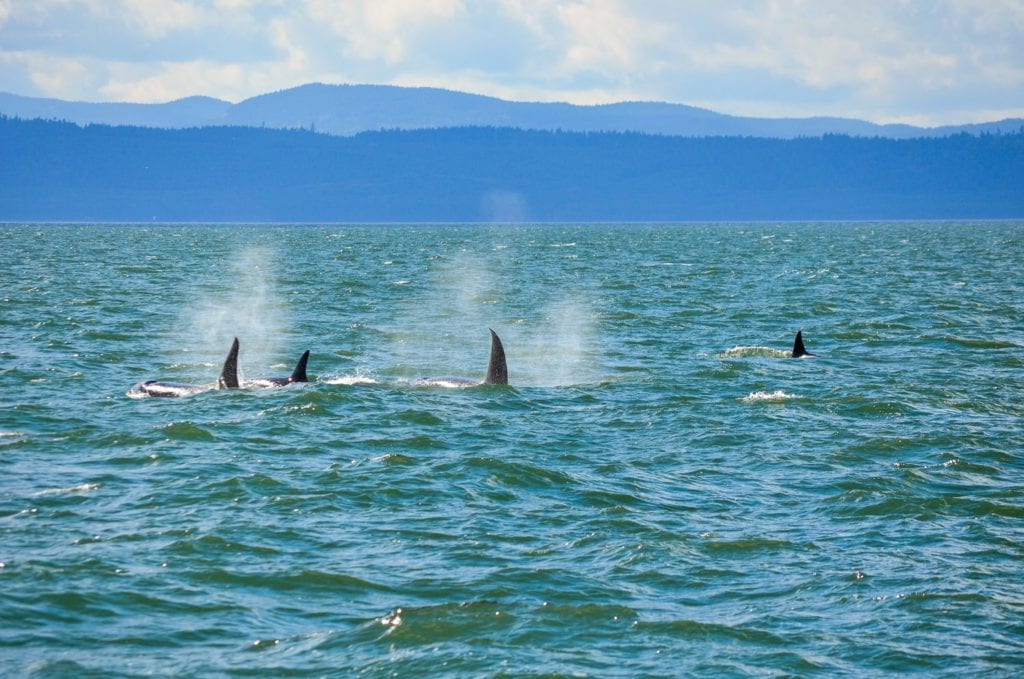 It wasn’t long before a black dorsal fin broke through the water. Like a sharp blade, it sparkled as the sunlight hit the beads of water falling from the fin and back into the Pacific Ocean. It’s an incredible experience to see these beautiful whales off the coast of Vancouver and there’s really no better place to see them in the wild.

It was an incredibly lucky day for everyone on the water. It wasn’t more than 20-minutes from the time we left the pier before the first killer whale graced us with its presence. It was a quick start to what turned out to be an unforgettable day. Over the next three hours, we must have seen various orca whales breach the surface more than 100 times. 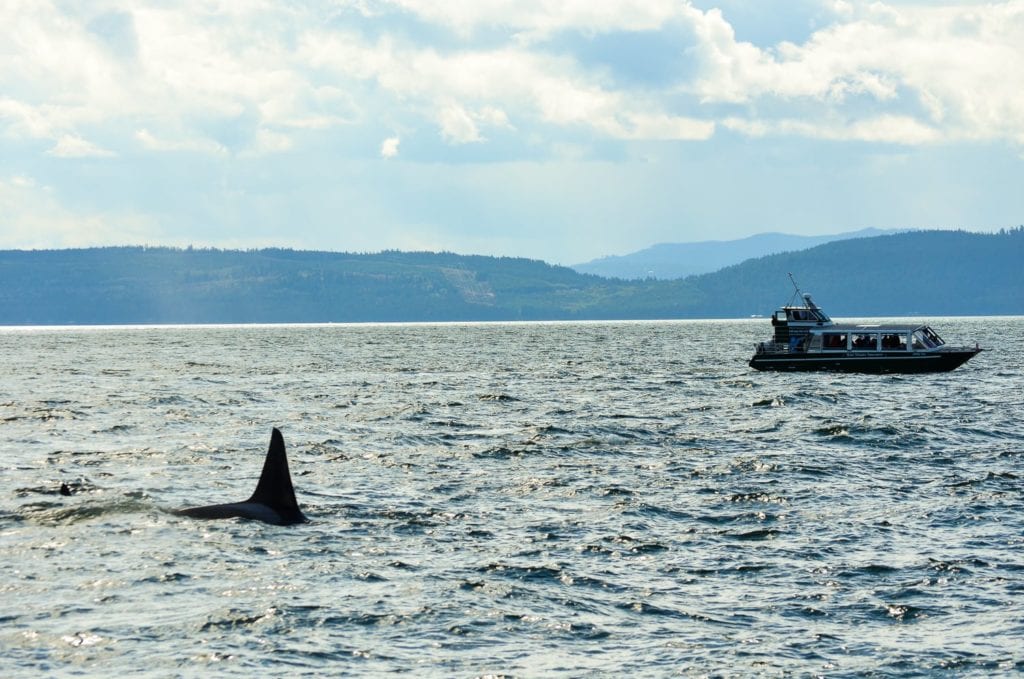 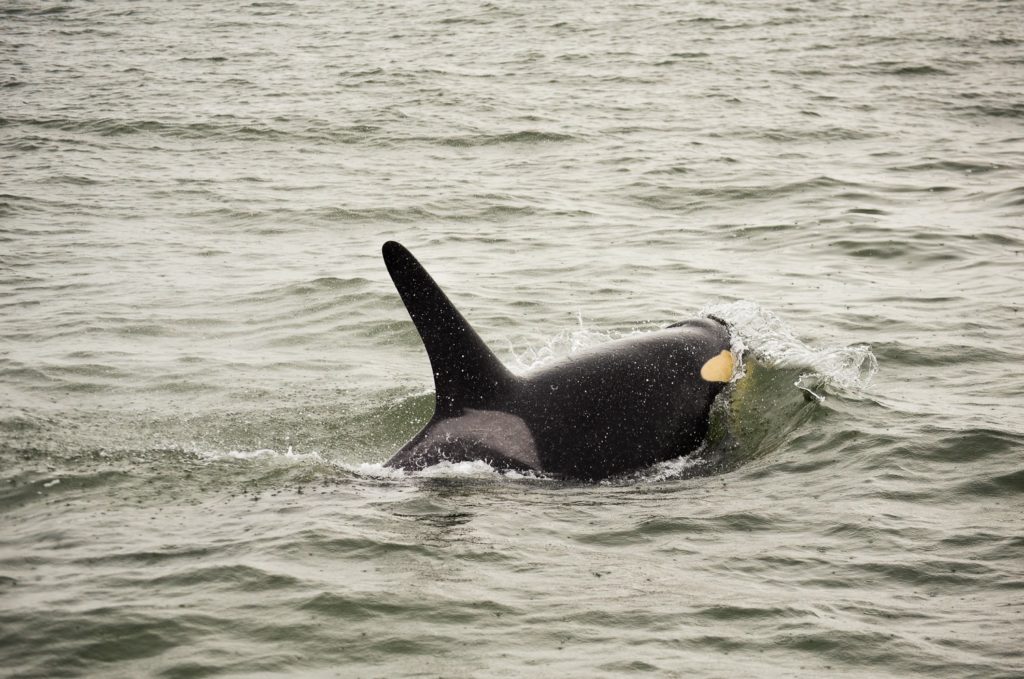 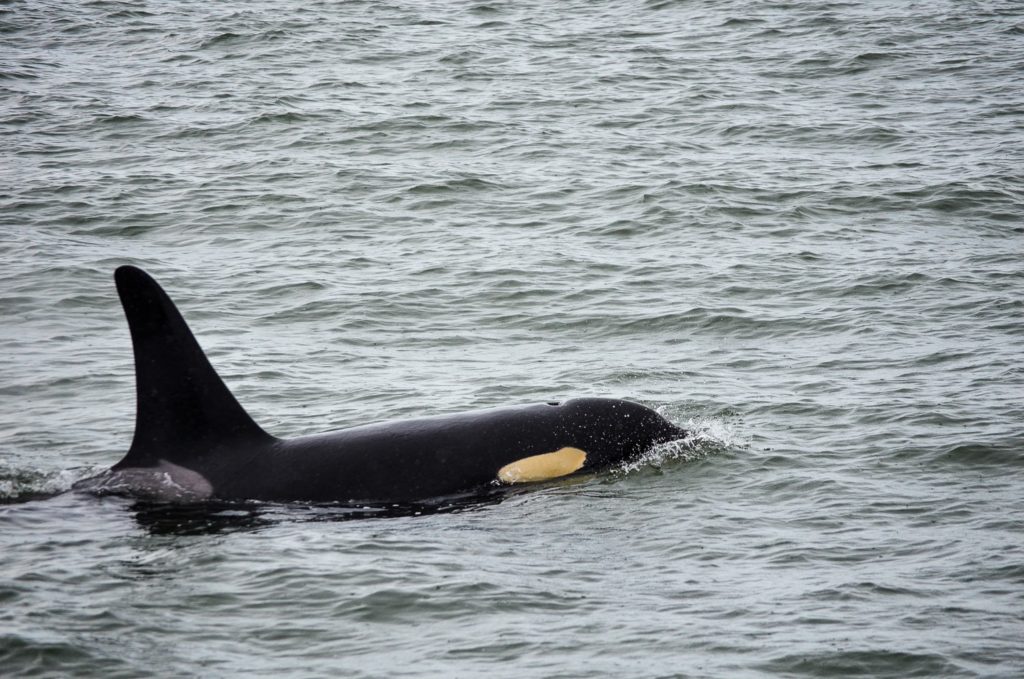 Sometimes they’d be seen in the distance and other times they’d be very close to the boat. Sometimes we’d see just the dorsal fin break the water and other times we’d see their tail splash the water as a form of communication. My favourite moment was seeing the entire upper body glide out of the water, allowing us to spot the signature white mark near the whales head. It was a magical experience.

After three hours of Vancouver whale watching, it was time to call it a day. After all, it was time to let the whales have peace and quiet. As we approached land, however, we got another surprise. Resident killer whales! As if the day wasn’t incredible enough, we came across a big family of Resident killer whales frolicking about in the water and putting on yet another fabulous show for all of us. Some of them were smacking their tail-fin on the water over and over again while others were just swimming by. At one point, three or four different whales breached the water at the same time. 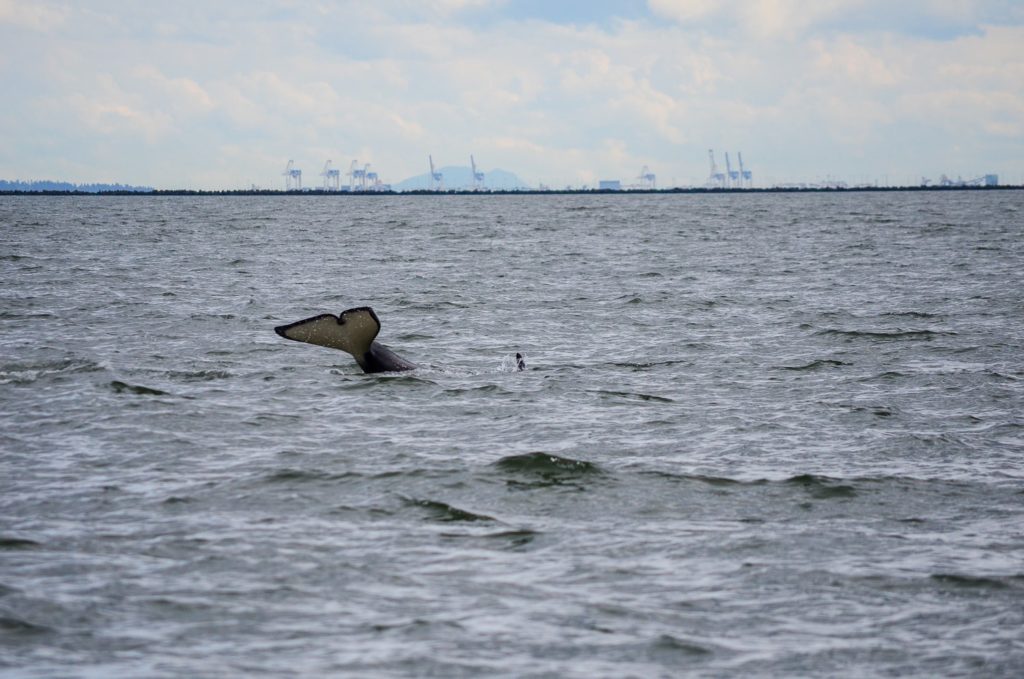 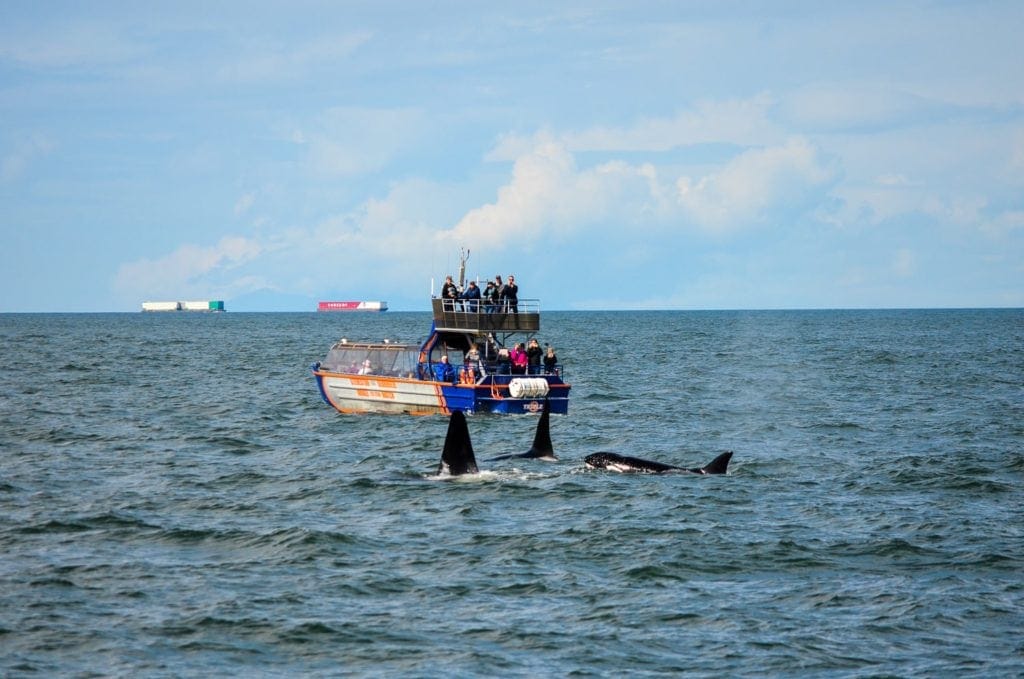 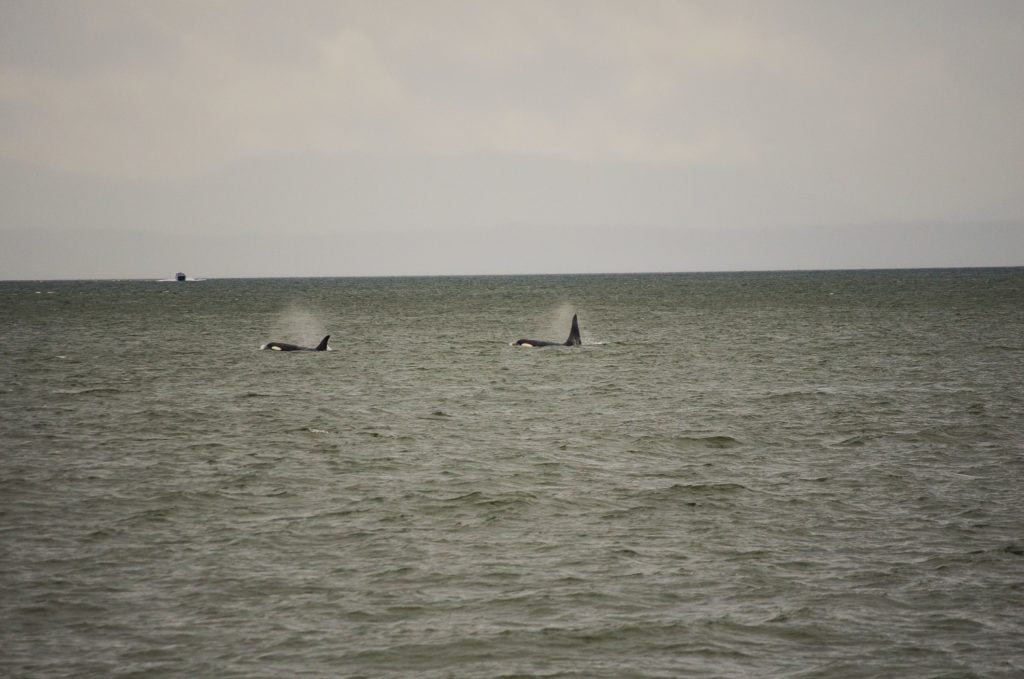 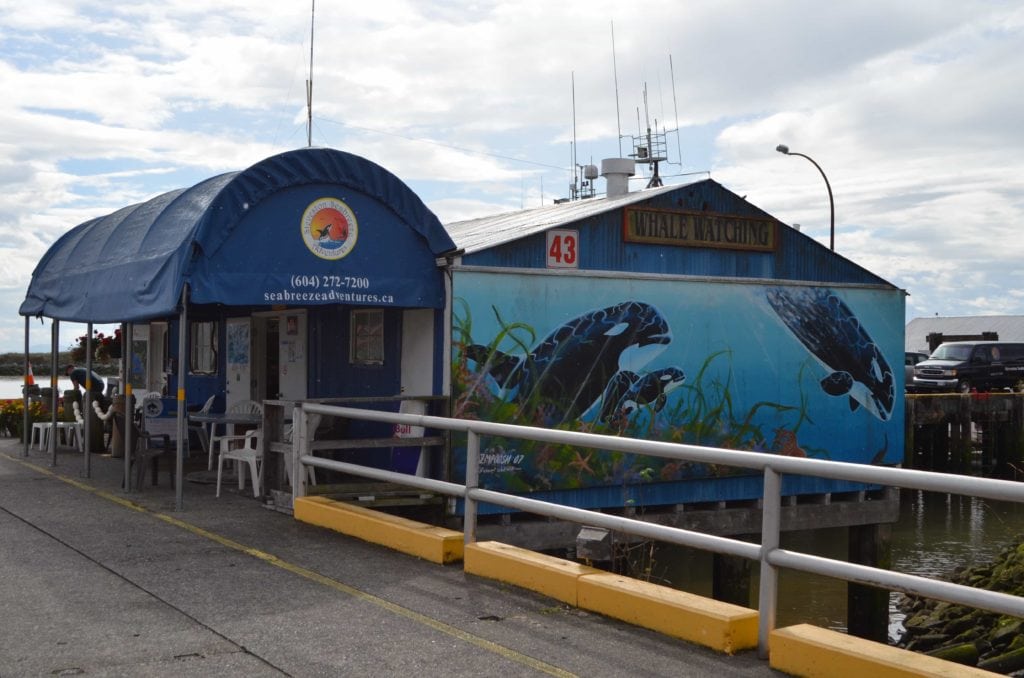 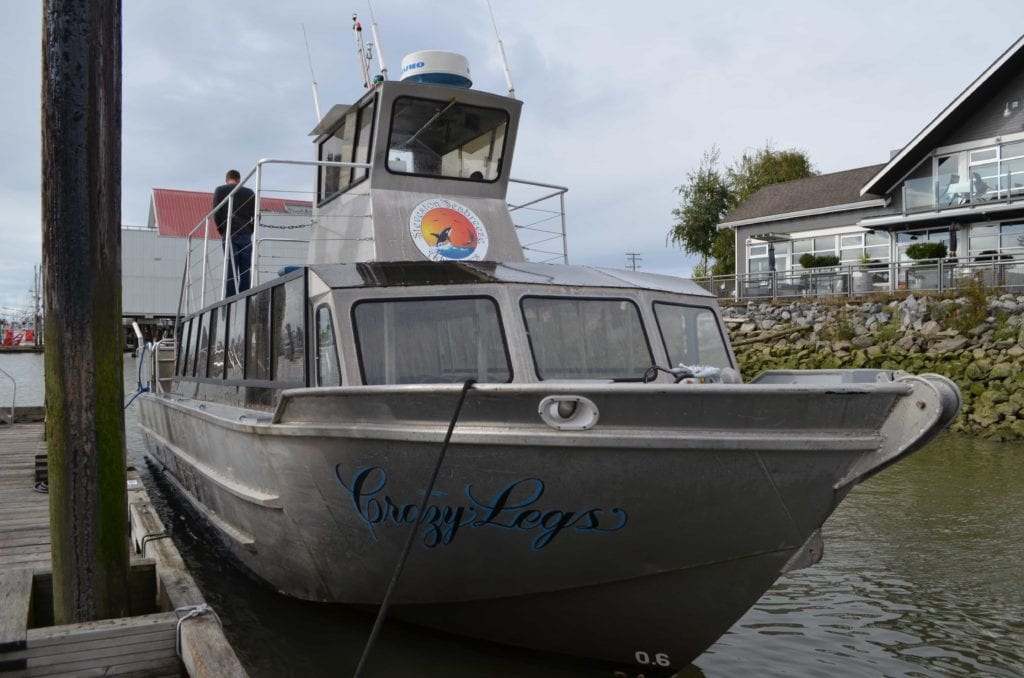 It had long been a dream of mine to see majestic killer whales in the wild. In terms of whale watching Canada, we’ve seen humpback whales in both Quebec and in Newfoundland but had never been to the Westcoast to see orcas. Canada is one of the best countries in the world to see whales. We have the Atlantic, Pacific, and Arctic oceans surrounding the country, and we also have the Hudson Bay in Manitoba, which is home to the biggest Beluga whale migration in the world. It’s really incredible how many types of whales you can see here.

So if you’re after Orca whale watching, Vancouver and Vancouver Island is the place to go!

Planning a Trip to See the Killer Whales?

If you’re in Vancouver, Steveston whale watching is where you’ll want to go. We went with Seabreeze Adventures, which is located in a small historic fishing village called Steveston. This “village” is in Richmond, which is located just 30-minutes south of downtown Vancouver. Their guides are very knowledgeable and friendly and the boats are top notch. Best of all, we saw loads of killer whales!

The best time to see killer whales is from May to October. Our trip above was done in September. Whale watching trips can be a magical experience and it’s a great way to get out into nature, see some scenery, and possibly catch a glimpse of some big incredible animals.

For more AWESOME travel photography, find us on Instagram:

Have you seen whales in the wild before? Where?